Increased government attention in recent times has evolved for stimulating growth in the rural sector in India. Transport, if analyzed for the cost-benefit analysis for rural poverty alleviation, has given one of the best returns in this regard. Road Investments in India were a staggering 3-10 times more effective than almost all other investments and subsidies in rural economy in the decade of 1990s.

Road investments are another name for investment in transport. Another integral part of increased mobility through transport in the rural areas is the bicycle ownership. What a road does at a macro level, the bicycle supports at the micro level.

BicyclePotential.org in that context explores the idea of using bicycle as one the best means to eradicate rural poverty in India. Analyzing researches and experiments done on the subject, it figures out the immense unnoticed potential bicycle has for rural growth and poverty reduction in India, since: 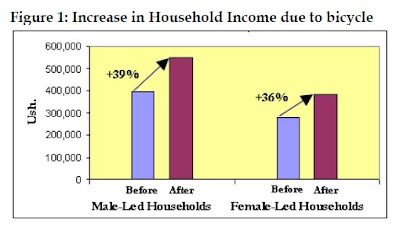 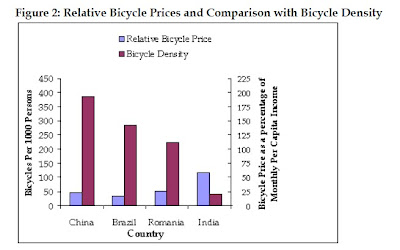 There is a hidden boon in bicycle for rural India .
1 comment:

Below are some comments on the concept by some eminent economists/ public policy thinkers.


"...I read your email note on importance of bicycle for rural productivity and growth. I am in agreement with your thrust. I congratulate you on this line of thinking."


"Many thanks for your email and the report on the need for increase in bicycle density in rural India to alleviate poverty. I shall definitely tell this to my colleagues and discuss with them your report."


"...As an idea to combat rural poverty this could be one of the weapons.....the hinterland still stays same, without road, without electricity, without communication. Your pet bicycle will play wonders there."

Effect of Bicycle on Poverty Alleviation

Impact of Bicycles for India

"We certainly like the idea and understand the importance of transport. The main focus of the discussion came to the realistic practice of the idea that if some one finds something very important for oneself then tries to have that. So the question comes up that if the bicycle is one important thing for poor people in rural areas then why aren’t people buying it. The reasons may be money and poverty or people don’t understand importance of having bicycle.

So the major question comes up that if given money would people like to buy it? For an example there are many SHGs which are providing loans to the poor families and the members normally take loans and buy buffalos but not bicycle etc.

So, are there some studies that show that when the poor people have access to resources they prefer to buy bicycles? "


- Query by one of India's leading research and educational NGO.

Well, both of the reasons, that the poor don’t have the money and they don’t understand the impact a bicycle can make in their lives, appear to be the reason for the under-ownership of the bicycle. Additionally, cultural resistance in some parts of India might also be responsible to make it difficult for women to own bicycles whereas in similar conditions in other developing countries like China and Brazil there might not be any resistance. Lets look at these issues.

Let me take the point of ignorance about the benefits of bicycles first. The fruits of investment in a buffalo, goat, sewing machine, poultry and fishery are very much visible to a human mind. But at the same time the benefits of education, roads, vehicles and to that effect even communication are not that much tangible and provide a secondary support in income generation. Though they may have a significant impact, their impact is not readily evident and may take time to materialize.