Impact of Bicycles for India

"We certainly like the idea and understand the importance of transport. The main focus of the discussion came to the realistic practice of the idea that if some one finds something very important for oneself then tries to have that. So the question comes up that if the bicycle is one important thing for poor people in rural areas then why aren’t people buying it. The reasons may be money and poverty or people don’t understand importance of having bicycle.

So the major question comes up that if given money would people like to buy it? For an example there are many SHGs which are providing loans to the poor families and the members normally take loans and buy buffalos but not bicycle etc.

So, are there some studies that show that when the poor people have access to resources they prefer to buy bicycles? "


- Query by one of India's leading research and educational NGO.

Well, both of the reasons, that the poor don’t have the money and they don’t understand the impact a bicycle can make in their lives, appear to be the reason for the under-ownership of the bicycle. Additionally, cultural resistance in some parts of India might also be responsible to make it difficult for women to own bicycles whereas in similar conditions in other developing countries like China and Brazil there might not be any resistance. Lets look at these issues.

Let me take the point of ignorance about the benefits of bicycles first. The fruits of investment in a buffalo, goat, sewing machine, poultry and fishery are very much visible to a human mind. But at the same time the benefits of education, roads, vehicles and to that effect even communication are not that much tangible and provide a secondary support in income generation. Though they may have a significant impact, their impact is not readily evident and may take time to materialize.

For an example, take again the results from the IFPRI study on subsidies and rural investments. (Please click the image to see it better) 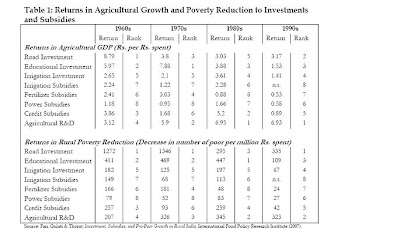 Though roads, education and agricultural R&D provide significantly better returns, to the simple logic of policy makers often the fertilizer and power subsidies take a preference since they provide instant, visible and easily measurable outcomes.

Further, the growth in income shown by the experiments done with bicycle has also been reported due to increased access to markets with higher crop prices, labor markets with higher labor rates, and the new economic activity started due to the saved time. These ‘probable’ outcomes might underscore for a poor in comparison to apparently ‘certain’ outcomes associated with a buffalo or a goat.

Coming to the point that poverty may be the reason, yes, this might be a great reason for it. Bicycle ownership has shown to be increased with a rapid rate when the economic hurdle was reduced in size. For example, in Shanghai the bicycle ownership increased 360% during 1980 to 1990 due to subsidy provided on the bicycle(1). In Lima (Peru), where low-interest loans were available to low-income families for the purchase of the bicycle and many kilometres of bike paths was built, the city succeeded in increasing the percentage of trips made by bicycle from 2% in the mid 1990s to 10% in 2000 (2).

Also, in Kenya a tax cut- from 80% to 20%- between 1986 and 1989 (i.e. about 1/3 price reduction) led to a whopping 1500% increase in bicycle sales(3). Though a direct mapping of these results can not be done for any other country, it can be reasonably said that the poor have shown signs of a much greater bicycle ownership when the economic hurdle has been reduced, either by subsidy, tax-cut or by microfinance.

In India there are at least 836 million Indians living on less than Rs.20 a day as per the government data. Over 200 million of them live on less than Rs.12 daily(4). So economic hurdle appears to be a great reason in the under-ownership of bicycle apart from the ignorance about its benefits.

As per the 2001 census out of 193 million households, 66 million (34%) do not have even a radio or a bicycle. Out of the about 60-65% poor Indian households, more than 60% of them (about 80 million) are estimated to be having no bicycle. Although it can not be said whether or not many of these households have intentionally not bought a bicycle as they see no benefit in it, comparison with a country like China or Brazil shows that people do buy a bicycle if they have the money for it.

Here the point about the cultural resistance also subsides. When about 40% of the household do not have even a single bicycle, issue of resistance to the women bicyclist becomes secondary.

Also MFIs/ SHGs focus on providing loans for visible and rapid means of income generation. For an example, as I understand, MFIs wont be that much interested in providing loans for education of children but for a buffalo or a sewing machine since income generation and hence early re-payment is assured to a better degree in the second case. In the absence of a collateral, the whole premise of an MFI is hinged on the visible, rapid and assured income generation by the borrower. Bicycle loses to buffaloes in that race.

Hence, both the reasons, the ignorance about the potential of bicycles and the inability of people to buy it should constitute for the reason of its under-ownership. Even the policy-makers appear to be less aware about bicycle’s potential- they spend much more on subsidizing petrol, used primarily by the middle class. Even while huge sums are spent to build rural roads, commensurate efforts are not made to have increased rural transport vehicles on these roads.


-Got an email query from a leading Indian economist.


More bicycles can not directly make per capita GDP ten times, but they can help mitigate the poverty at a significantly rapid rate. This in turn, will help raise the average per capita GDP, and reduce the variance in the income distribution curve.

More bicycles mean easier and cost effective transport to the rural India (Bicycle industry reports that about 90% of the basic model bicycles are sold in rural/ semi-urban India). If some-one traveling 6 km per day on foot can be induced to buy a bicycle, it will amount to about one hour saving of his time daily, i.e., the potential to raise productivity of a person by 10%.

Bicycle ownership in India is significantly lower compared to many other countries. So there are a lot of people who are still losing their time traveling on foot.

-To read the full reply, and excerpts from relevent literature on the subject, please Click here.